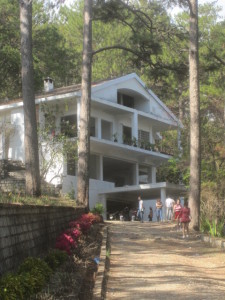 The haunted house in Dalat, Vietnam.

It’s hard to believe that such a beautiful house could be haunted. . . but it is. In February of 2015, I visited the house located in the mountains outside Dalat, Vietnam along with my wife and her sister and brother-in-law, my son and his wife. Loan, my daughter-in-law had visited Dalat several times before and knew about the house, although she had not visited it; she said it was infamously known throughout the region as being haunted.

When we arrived at the house our driver parked the car at the end of the long driveway but refused to go any further. He also declined to go inside the house; Loan also declined. Bai, our guide, and the rest of us walked up the driveway to the house, Bai telling us how the house became haunted. Bai said that during the American War (as it is known in Vietnam) the owner of the house, an officer in the Army of the Republic of Vietnam (ARVN) was killed in battle by the Viet Cong (VC). When his wife heard the news, she became so distraught that she hung herself from the roof. After her suicide, the house was abandoned, no one willing to buy it.

But the army widow is not the only ghost. Much later after the war, teens would sometimes hang out in the abandoned house, drinking, taking drugs and just generally raising hell. A group of men abducted a girl from a nearby village, brought her to the house and eventually murdered her, throwing her body into the well. By the time the villagers located the girl’s body in the well it was so badly decomposed that they could not bring it up. Instead, they sealed the well, turning it into her grave. They erected a shrine to her memory at the well. 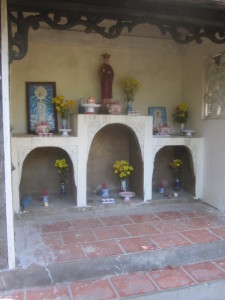 The shrine at the well in memory of the slain girl.

Since that time, a young girl in white has been seen drifting through the woods around the house, or hitch-hiking along the road. It is said that if a driver stops to pick her up, she will vanish from the car before reaching her destination, just like the American “Resurrection Mary” ghost. In addition, a group of teens brave enough to spend a night inside the house, who had passed out from too much drink, woke in the morning to find themselves all lying on the ground outside the house. It is because of these haunting events that the nearby villagers erected a Buddhist shrine inside the house in order to quite the ghosts. Hmmm, is it working? 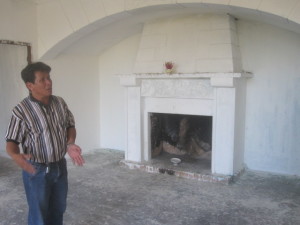 Our guide, Bai, inside the haunted house. 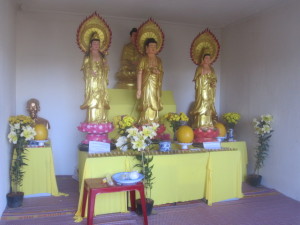 The Buddhist shrine built inside the house to quiet the ghosts.

8 thoughts on “HAUNTED HOUSE IN VIETNAM”