Mr. Flying Ice Cream Guy, the amulet (and ice cream) vendor and I check out the inventory. 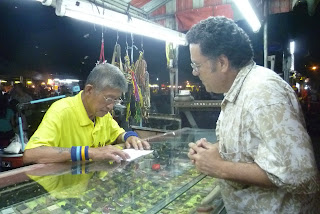 Using Pom’s note, Mr. Flying Ice Cream Guy suggests an amulet that will help me see and communicate with ghosts. 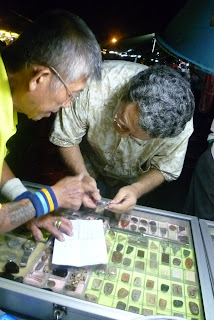 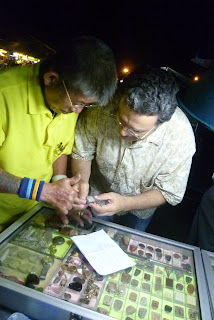 The deal is done! I’m the proud owner of a Phra Phis Ta amulet. 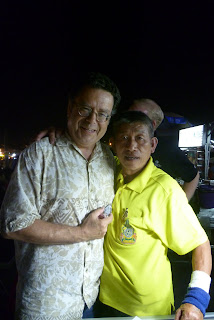 Thailand is full of ghosts and other spirits. 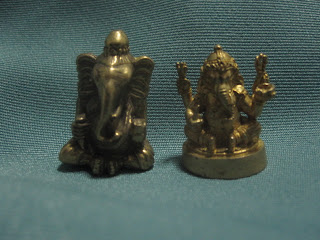 No self-respecting Thai would be caught dead (no pun intended) without some charm or amulet on his person to protect him or to bring him luck. Many men will wear an amulet around their necks, just as Christians will wear crosses or medals of saints. Women may also wear amulets or they might carry a charm or medal in their purses and almost every car in Thailand will carry its own little shrine on the dashboard honoring Buddha or a Hindu deity, or perhaps a favorite monk.
The sale of amulets in Thailand is a big business. Most wats (Buddhist monastic complexes) sell them and they are ubiquitous in all the night markets. Bangkok has an entire section know as the Amulet Market, at which scores of sellers display table after table of amulets, charms, and medallions. I visited the market and was overwhelmed by the sheer number of items offered for sale, literally a million or more.
People are serious about their amulets. It is not uncommon, as I noticed at the Amulet Market, for a savvy buyer to use a jeweler’s loupe to closely examine the item for age and authenticity. Some amulets are antiques and prized by collectors, others are designed to be worn. They come in all shapes and sizes, depicting a wide range of spirits, gods, and holy men. They may be made of metal, ceramic, terra cotta, wood, sometimes even plastic. A monk gave me this Ganesh amulet. 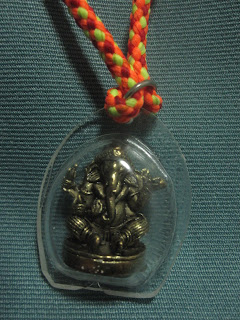 Any good bookstore will carry one or more of the several magazines devoted entirely to amulets. New amulets are often advertised on billboards, often with a larger than life picture of the designer, usually a monk. Some monks have achieved celebrity status through their art and their amulets are highly prized.
Amulets are frequently worn for protection against accidents, sickness, bad luck, and, of course, evil spirits and ghosts. So, when I said I wanted an amulet that would attract ghosts, I certainly got strange looks. But I’m a ghosthunter; wouldn’t such an amulet make sense?
I asked my friend Pom at Silpakorn University in Nahkon Pathom to write me something in Thai that I could show to an amulet seller. Pom wrote, “Would like to have something that can give me access to contact/see/talk to spirits/ghosts—I don’t want to use this as an evil thing or to hurt anybody.” Alright then, I was good to go. I found my amulet dealer at the Nahkon Pathom night market outside the Phra Pathom chedi, the tallest Buddha memorial in the world.
The dealer had two stalls side by side at the market, one to sell amulets, the other to sell “flying ice cream” (nothing like diversifying in business). Mr. Flying Ice Cream guy wowed the crowds by scooping out ice cream then flinging it high into the air and catching it in the scoop behind his back. Another Thai that spoke English said that Mr. Flying Ice Cream claimed he had performed in Hanoi, Beijing, and Las Vegas; I had my doubts, even in Vegas.
Mr. Flying Ice Cream read Pom’s note and knew immediately which amulet I should buy. He showed me one that depicted a monk with his hands covering his face. He kept smiling, pointing at the amulet while giving me a thumbs-up sign and repeating, “Number one!” On a piece of paper he wrote down the price—5,000 Baht, about $150. I wrote down 1,000 Baht, about $30. We settled at 1,500 Baht, about $45, which meant that the amulet was probably worth about $5. The sacrifices I make for research!
The amulet (below) is called Phra Phid Ta, which roughly translates to “monk closed eyes.” It depicts a monk who, according to legend, closely resembled the Buddha and was often mistaken for him. His sense of humility and respect for the Buddha caused him to cover his face with his hands so that no one would ever take him to be the Buddha again. 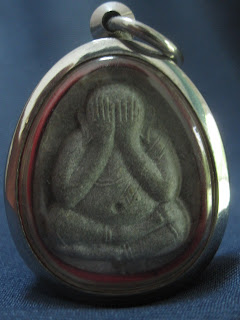 The amulet is supposed to protect the wearer from harm—especially from knives and guns—and is also supposed to render the wearer nearly invisible to his opponent. I wondered if someone “nearly invisible” would look like a wispy ghost. Perhaps that was how one attracted a ghost, by looking like one. I didn’t know for sure, but I would soon find out.
Stay tuned!

In the early morning, as dawn streaks the gilded peaks of the temples with a rosy brush and the streets below are only beginning to wake, come the monks. Silently they come, wrapped in their saffron robes, alms bowls held before them for the elderly women that respectfully drop food into them. The monks walk in single file, barefoot, the eldest first, the youngest—who may be only a boy of ten years or younger—at the rear, each of them keeping enough distance between them so that no one’s shadow falls upon a fellow monk.
The monks are not begging for their sustenance. Rather, they are giving their fellow Buddhists a chance to earn merit for themselves through their generosity. Such is the role of the monk; to earn merit, yes, but also to help others do so. 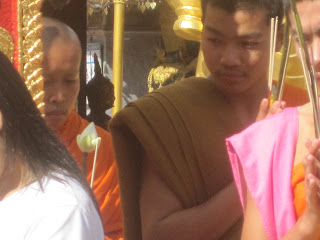 Thailand is 95% Buddhist and the influence of the religion is felt everywhere, sometimes subtly, as in a Buddhist amulet worn discretely around the neck beneath a shirt, or more ostentatiously, as in the soaring, gilded wats (monastery complexes) are ubiquitous to the Thai landscape.
For a Westerner It is difficult to understand that almost every Thai male will spend some time as a monk. That may be a lifetime, or it may be as short as a single day, but it is the rare male that does not spend some time barefoot, wrapped in robes, contemplating the teachings of the Buddha. 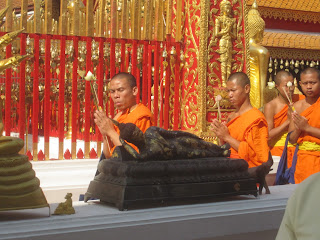 A man cannot be ordained as a monk until he is at least twenty years old. Until he reaches that age he is considered “unripe,” not yet mature enough to be ready for marriage and responsibility. When a man is ordained into monkhood, he shaves his head, eyebrows, and facial hair and dons the saffron or maroon monastic robes. Boys under twenty years of age may also join a wat as a novice. Like the monks, they too shave their heads and wear robes.
While novices take only ten vows, monks take 227 vows, including abstinence, poverty, obedience, and chastity—a monk cannot touch a woman, even his mother an anything given to a monk by a woman must first be placed on a cloth or some other receptacle before it can be touched by the monk.
Life in the wat is quiet and studious. Most of the time is taken up by religious studies, chanting and meditation, interspersed with some free time for individual study. Monks begin their day with chanting and meditation at 4 a.m., leaving the monastery at 6 a.m. for their rounds of the neighborhood with their alms bowl. Breakfast is at 8 a.m. with the last meal of the day being taken at about noon. After that are more classes, chanting and meditation until bedtime.
Unlike cloistered monks of other faiths, Buddhist monks are very much in evidence in the community. Besides their morning rounds, they are often seen coming and going to and from the wat; browsing in the markets (especially amulet markets and book stalls); riding buses and motorcycle taxis (“motocys”), and, of course, going about their daily routines in the wats, which are open to the public. The monks are so visibly present in the community in order to continually remind people of the Buddha and his teachings and to provide a means by which people can earn merit, especially through alms-giving. 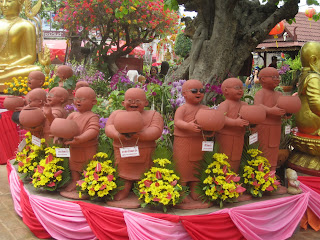 What does it say about a country in which all the men become monks? Certainly the people of Thailand, their friendly natures notwithstanding, are neither more nor less saintly or holy than the rest of us. Yet, is there not something gained, even if only fleetingly, when one turns away from the mundane world to concentrate on the divine, however that divinity may be perceived? Is there not hope that such a fermata may take hold in one or several of us? And if that happens, is there not hope that in that stillness divinity can make itself known to all?