So, after exploring the ghost house on the campus of Silpakorn University, I became curious about the abandoned village just beyond the canal from the ghost house. I could see the dark windows of the forlorn houses looking at me from beyond the trees but I could not get to the village. There was a rickety old footbridge that would have taken me across the canal but access to it was blocked by a chain-link fence with a padlocked gate.

Once again I turned to my friend Pom, who by now I had come to regard as Mighty Mouse, since he was always there to “save the day.” Together, we walked to the Sanam Chan Royal Palace which bordered the campus, thinking we could get into the village from there. And we did. Oh, it wasn’t easy, since the village is off-limits to the public but Pom smooth-talked us through a phalanx of soldiers, policemen, and security guards until we gained admittance to the office of Teerasak Changpet, a public relations officer who was more than happy to give Pom and I a private tour of the village. 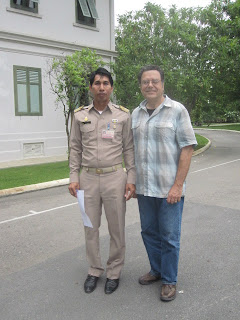 The three of us wandered through the village. Teerasak told us that the village was over 100 years old and that, at one time, served as a military post for local militia; he pointed out the buildings that had been used as barracks. 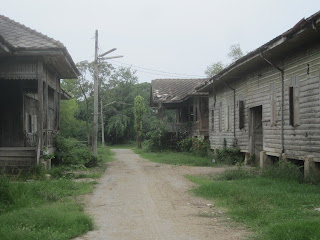 We came to a house that looked small from the front, but extended to the rear quite a distance. Teerasak paused before the house—at a safe distance—and told us that a strong spirit occupied the house. I asked if we could go inside and he said we could but before we did, he said a little prayer to appease the spirit of the house. The three of us climbed up the dilapidated stairs and went inside. The house was divided into two large rooms. Weak light filtered in through the open windows. Clothes and garbage littered the floor. 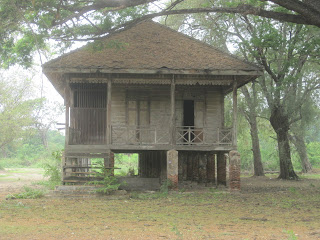 While Pom and Teerasak were in the front room I walked into the room at the rear and stood there awhile, absorbing the silence of the place. I felt as though something was there, something not unfriendly, but mysterious and beyond my approach. 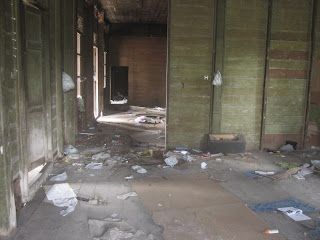 When we left the house Teerasak told us that some people had seen the ghost of an old woman there, but he had his one ghost story to tell. He was patrolling the grounds from a motorcycle one night and when he drove by the house he saw a man wearing what he described as the “traditional clothes of an official.” He was surprised because there wasn’t supposed to be anyone on the grounds but also because the man was visible only from the waist up. That’s when Teerasak realized the half-man was, in fact, a ghost.
I would like to have returned to the village at night but was unable to do so. I did, however, return to the ghost house on the university campus one night. Read more about that next time.